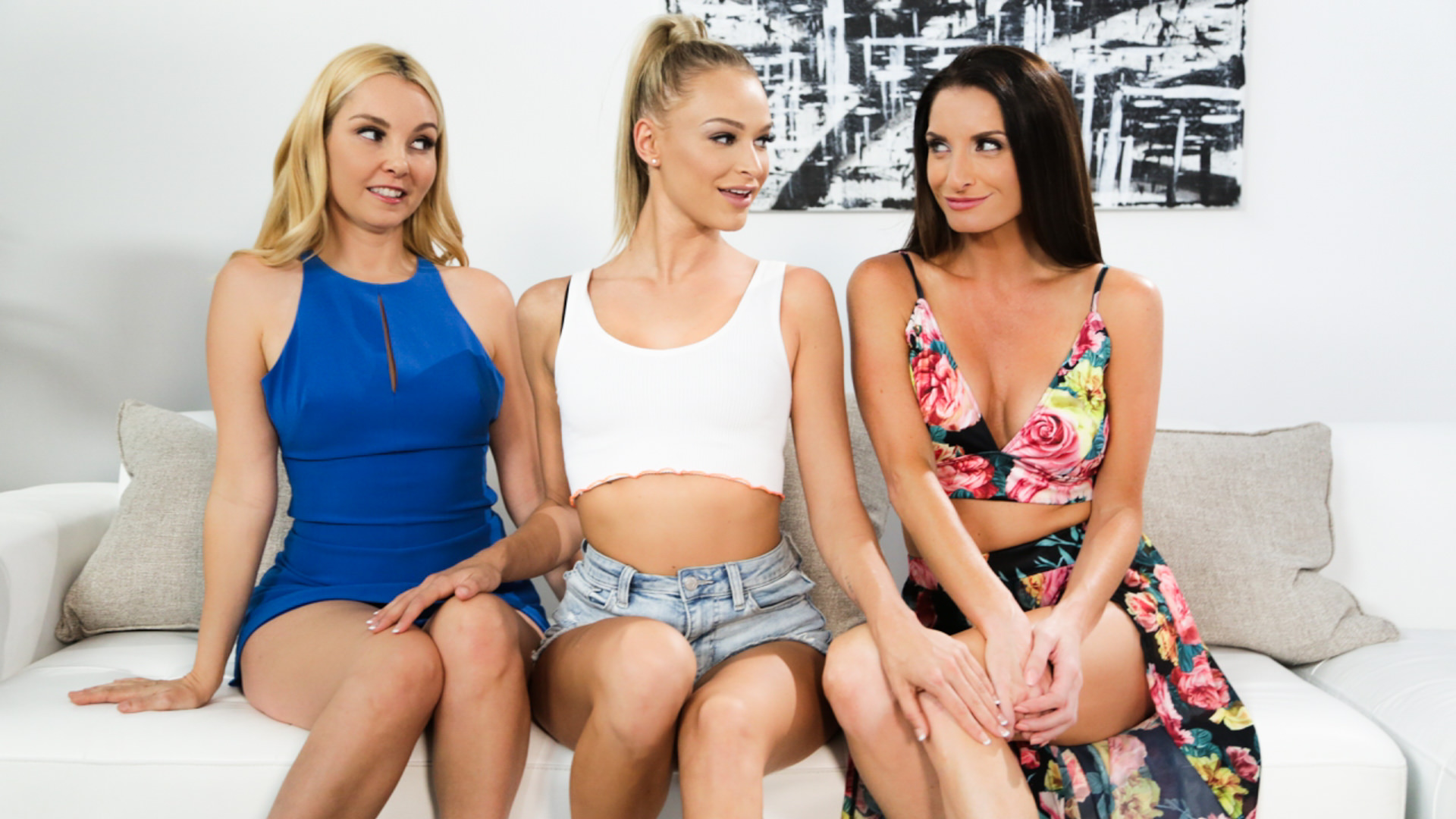 Wives Aaliyah Love and Silvia Saige are talking about their new babysitter while waiting for her to show up. Aaliyah is a bit nervous but Silvia can’t wait for the freedom having a babysitter will allow.At that moment, the doorbell rings and the wives invite the babysitter, 18-year-old Emma Hix, inside. They chat with Emma, who innocently flirts with them. Aaliyah and Silvia then leave for work, closing the door behind them. Emma watches the door for a few moments before grinning to herself, nipping her bottom lip as if having mischievous, lustful thoughts.A few days later, Aaliyah and Silvia are getting home from work. They greet Emma and make idle chat, asking how the day went. Emma assures them that Victoria was wonderful! Is it okay if she finishes up the tidying she was doing before she goes? Aaliyah and Silvia are impressed, allowing Emma to finish her cleaning.Emma picks up a duster and tidies the nearest furniture as the wives settle in. Aaliyah insists that she’s just going to go say hi to Victoria. After Aaliyah leaves, Emma sneaks a look at Silvia and ‘innocently’ bends over to dust something, showing off her ass. Silvia’s eyes go wide as she does her best to tear her eyes away from Emma’s hot ass.The next day, the wives again get home from work and chat with Emma briefly. Silvia’s cell phone rings. She checks it and says it’s her mom, so quickly excuses herself from the room.Emma sees her opportunity and mischievously saunters toward Aaliyah, sitting next to her on the couch. Emma becomes more blatantly seductive, touching Aaliyah’s arm. Aaliyah almost melts into the touch, but then shakes her head. She excuses herself, rushing out of the living room.After Aaliyah leaves, Silvia returns, putting her phone away. She looks around for Aaliyah and seems a bit nervous that Aaliyah isn’t around. She asks Emma where Aaliyah went.When Emma responds with a flirtatious comment, Silvia becomes weak in the knees with arousal, though straightens back up and looks guilty. She quickly thanks Emma for her help that day and takes Emma by the shoulders, steering her towards the door. Emma smirks and takes her leave.Silvia lets out a sigh of relief, though still looks conflicted.The next day, both Aaliyah and Silvia are wracked with guilt over how they’ve been looking at Emma. They sit down to talk, confessing that they’ve been lusting for the babysitter and agree to fire her to protect their marriage. They invite Emma over.An hour later, Emma arrives at the house. She cheerfully greets the wives, though her smile fades a bit when she sees Aaliyah and Silvia looking serious.They invite her in to sit down. The wives try to fire her, stating that they need to protect their marriage. Emma insists that they can have a threesome, since THAT wouldn’t be considered cheating. Aaliyah and Silvia are shocked, then enlightened. They turn to each other, marveling over how they never even considered that! It’d really make their lives a whole lot easier if they could just work out all that tension and have a bit of fun. They really DO need some private time together.After a brief back and forth of checking in with each other to make sure a threesome is really okay, they eagerly agree.Emma sure is one TEMPTING babysitter!!